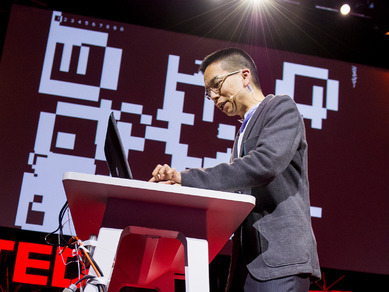 TED Talks John Maeda, President of the Rhode Island School of Design, delivers a funny and charming talk that spans a lifetime of work in art, design and technology, concluding with a picture of creative leadership in the future.

How was Airbnb born?
I had just quit my job in LA and drove up to San Francisco to live with a friend from RISD [Rhode Island School of Design], Joe Gebbia. I got there, and we basically realized that our rent was more money than we had in our bank accounts. You know, out of necessity, you sometimes become very, very creative. Well, this is one of those cases. We were basically aspiring entrepreneurs, we knew that we wanted to start a company doing something, but we didn’t know what.

It turned out that that first weekend I came to San Francisco, there was this international design conference happening, the IDSA. On the conference website, all the hotels were sold out. Joe and I were talking, and we came up with the idea of having a designer bed and breakfast. The idea is that we can just house the designers, get to meet them, and make money to pay our rent. I didn’t have any furniture, but we had an air bed in the closet.

We ended up hosting three people. The fact that they were from totally different demographics and from all over the world was the thing that made us start to realize that maybe there was a new idea here. What’s funny is that even after that first week, it still wasn’t clear that Air Bed and Breakfast was going to be the business. We were still brainstorming business ideas. It wasn’t until about six months later, when we launched the website, that we were really committed to the idea of it.

We were aspiring entrepreneurs, we knew that we wanted to start a company doing something, but we didn’t know what.

How has Airbnb evolved since the “air beds for conferences” days?
As we started growing, it became clear that people wanted more than just Air Beds. They wanted houses, they wanted just space, in the abstract sense. They didn’t just want space for events, they wanted space for vacation, for business trips. We started thinking, why limit it?

So it all started with just sharing, well, living rooms. Then it went to bedrooms, then it went to entire homes and apartments. From there, it started going to all sorts of other spaces, like castles, tepee houses, boats, igloos, anything. And that’s where it’s moving towards today. We really think of ourselves as a marketplace now for space.

You have a background in industrial design. How does that play into your work now?
I think that industrial design is all about user experience. You become a user, you become your own guinea pig, you learn to observe the world. It’s important that you put yourself in the shoes of the user and really use the product. I literally live in Airbnb. I gave up my apartment and only live in spaces found on Airbnb. The original reason I did it was because we needed space; we turned the bedroom into a meeting room. It’s meant to be a short-term thing, because I needed a place to go. And then I decided, you know, this is actually an industrial designer’s dream.

In other words, if you were designing medical equipment, you would want to be in an operating room, observing. You wouldn’t just want to be looking at data at all. And that’s the thing that we think about. We think about user experience. Put ourselves in the shoes of the user, and we view the decisions coming from a design-oriented philosophy.

Tell me about your experience living only in Airbnb rooms. How long has this been going on?
It’s been going on for three months so far, and I change spaces about every five nights. It’s been amazing. I’ve stayed in very unique spaces, very social environments. I’ve stayed with one of the top air guitarists in San Francisco, also a guy who is the #2 ranked Ski-Ball champion in the US. I stayed at one architect’s house; he designed his own house, and it was a beautifully furnished, a very open and modern eco-friendly planned space.

Originally, I told everyone I was going to do this for the summer. Then I said, what the hell, I’m going to take it all the way through 2010. I do have a personal goal, which is to do it until I’m 30. I’m 29 now, so for another year.

As an industrial designer, you just have to consume it, you have to live it. I think what I’m doing is slightly extreme, kind of pushing the boundaries, but I actually think that it’s the future of how a generation of people will live and travel.

What benefits has the experience had for your business?
Understanding nuances and learning how to empathize with our users. Also, improving the UX of site.

As an industrial designer, you just have to consume it, you have to live it.

How has your team grown since you guys set up shop in your apartment?
We have close to 20 people working in the office. The culture has a very laid back and fun, informal environment. We’re always sharing ideas and running around; it’s super high energy. We try to give people a lot of autonomy to do their own thing, so they can champion their own ideas. As long as they communicate their vision for our goals and what we’re trying to accomplish, it’s just a matter of then giving people the autonomy to pursue what they think their contribution to the company can be.

Three years ago, Brian Chesky had just arrived in San Francisco with not much more than a memory foam mattress and a dwindling bank account. He had two problems: no job, and no money to make rent. Today, Chesky lives exclusively in mansions, tepees, apartments, and castles. In short, anything he can find listed on the “marketplace for space” otherwise known as Air Bed & Breakfast, which he created with co-founder Joe Gebbia. Not coincidentally, Airbnb came about when the lives of its two co-founders, as well as the American economy, were at a crossroads. The way Americans conceptualized vacation was changing, and the idea of “renting from real people” emerged to fill a gaping void between hotel stays and budget travel. With Airbnb, vacation doesn’t have to be a financial extravagance (although it certainly can be, as Airbnb’s offerings extend to spaces that would make The Four Seasons look like a hostel).

Whether it’s a spare couch in a studio apartment or a vacant house by the beach, individuals around the world are making money by letting strangers into their homes, and anyone with a computer and a credit card suddenly has access to a space and a culture that they might otherwise never experience.

We caught up with Chesky one morning after he arrived at the office, coming straight from the Airbnb listing in San Francisco that he called home for the previous week. He spoke about his Industrial Design background, becoming a user experience guru, and the future of work, life, and travel.
END_OF_DOCUMENT_TOKEN_TO_BE_REPLACED