Written by Jeff Bullas | jeffbullas.com The web today is continuing to grow at an astonishing rate and it’s not just the humans that are becoming connected at accelerating rates but  ’things’.

This month non-human objects such as GPS devices and Broadband TV’s are coming online in greater numbers in the last 3 months with AT&T and Verizon than new human subscribers according to research analyst Chetan Sharma.

So you thought social networking was the center of the web growth universe?

That laptop that is placed conveniently at arms length from your bed is not the the only connected device that is making an impact on the way we live, interact, work, socialize and play.

Even though our web social interaction has picked up at a fierce pace with Facebook, Twitter and You Tube being our most popular social media interaction channels of choice the ‘things’ we use are having micro chips attached and are being linked and networked via the internet into the world wide webs backbone and nervous system.

So what are some of the facts and figures and predictions that will impact our social web and how we will use the Internet over the next few years and decades.

This 5 minute video from IBM will give you some perspective on this fast growing world of the Internet of things. END_OF_DOCUMENT_TOKEN_TO_BE_REPLACED

END_OF_DOCUMENT_TOKEN_TO_BE_REPLACED

Those last few statistics are striking as you would imagine that many small business owners work well beyond the usual 9 to 5 hours, using their smartphones and tablets to stay connected even when they leave the office. Owners and workers of small businesses must be careful not to spend too much time on work matters outside hours out, while being footloose has its advantages, not taking time to switch off could, in the worst case scenario, cause burn out and affect your business in the long run.
To summarise, AT&T compiled two videos containing highlight of the poll’s most noticeable statistics, which you can view below. 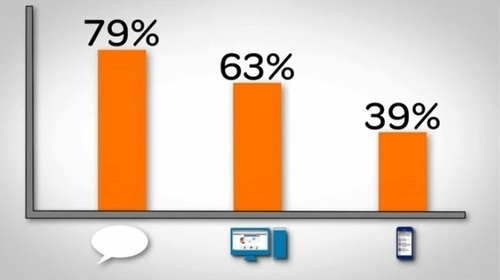 According to the 2012 AT&T Small Business Technology Poll, 39 per cent of small businesses rely on social media to promote their business but they place greater importance on their company website (63 per cent) and on word of mouth (79 per cent).
The poll, which surveyed more than 1,200 small businesses with two to 99 employees across the U.S., found that those with a presence on LinkedIn increased from 25 per cent in 2010 to 31 per cent in 2011, while those with a Facebook presence increased slightly from 41 per cent in 2010 to 44 per cent. However, Twitter is beginning to decrease in popularity with small businesses, but only slightly, with a drop of 1 per cent to 18 per cent for 2011.
An eye catching statistic involves the attitude of gender demographics towards social media. While male business owners are more likely to rely on their company website for marketing than female owners (65 per cent vs. 58 per cent), female owners are more likely to rely on social media for promotion (48 per cent vs. 34 per cent). This suggests that female owners are more interested (or comfortable) in talking with their fans and followers online, whereas male owners prefer their website to do the talking for them instead. END_OF_DOCUMENT_TOKEN_TO_BE_REPLACED