What makes an ad great? Simple: people choose to watch it. On YouTube, we see this more and more – fans are opting to view and share content they’re passionate about, be it a music video, a favorite show, or an ad. The January 2013 YouTube Ads Leaderboard celebrates the U.S. ads uploaded within the month that most moved audiences through a winning combination of promotion (paid ads) and popularity (organic views). And with over 51 million combined views, it’s proof that if you make it great, they will come.

Via
Think with Google

Nike Golf: No Cup Is Safe

Child of the 90s | Internet Explorer

Huge Bear Surprises Crew on EcoBubble Photo Shoot in BC

For additional coverage of the YouTube Ads Leaderboard, go to Adweek.com
Ads were included on this list based on organic views, paid views and view rate. All ads were uploaded in the U.S.

As YouTube’s global audience hit 800 million users in 2012, YouTube’s content inventory has kept pace and has grown to 160 channels of original programming. Google looked at audience reach and brand metrics across 448 campaigns in 6 countries (U.K., U.S., France, Germany, Japan, and Italy) over the last 12 months. This infographic captures the efficiency and effectiveness of advertising on YouTube in 2012.

This Google whitepaper examines the changes in video gamer digital behaviors through the lens of millions of tablet, desktop, and mobile searches. It also explores the meaningful link that exists between online engagement and game sales. Our research uncovers the following key trends: 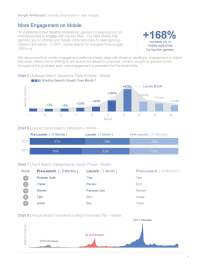 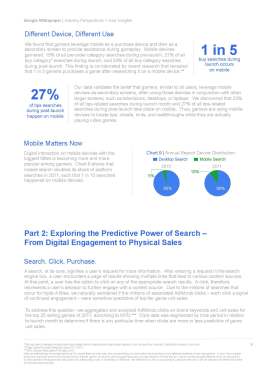 This edition of Think Quarterly is dedicated to digital creativity in its many forms – from YouTube remixes to next- generation advertising to data visualizations – and what it means for your business. We hope it makes you feel like a kid again.

We are never more creative than when we are kids. The world is new, and we explore it all, wide-eyed and inquisitive. Our favorite question is ‘Why?’

Technology unlocks this childlike wonder in all of us. Every day – every second – there is something new online. This lets us grown-ups be both endlessly curious and profoundly creative. We can ask ‘why?’ and get answers from everywhere – search engines, wikis, social media. We can ask ‘why not?’ and find new, tech-driven solutions to old, analog problems.

END_OF_DOCUMENT_TOKEN_TO_BE_REPLACED

What happens when legendary admen of yesteryear are given cutting-edge digital tools to revisit their greatest moments? If Google’s Re: Brief is anything to go by, you unlock the creative potential of new media advertising.

Ask anyone to name the greatest television commercial of all time and a list of contenders will likely spill out. Ask the same question about, say, banner ads and chances are you’ll meet blank stares. So far, the secret to making a classic internet commercial has remained locked away. To get at it, Google took an approach straight out of a heist film, persuading a team of veteran safe crackers to come out of retirement for one last job. These legendary advertisers would work alongside a team of technical whizz-kids and creatives in an experiment to turn four iconic campaigns into cutting-edge online ads using the kind of technology they couldn’t have dreamed of as younger men.

Bob Pasqualina was sanding an antique wooden skiff in his garage in Ashley Falls, MA, when his old partner Howie Cohen called. The pair created the CLIO Hall of Fame television spot ‘I can’t believe I ate the whole thing’ for Alka-Seltzer, and hadn’t worked together for 30 years. Cohen explained that Google wanted them to re-imagine their 1972 ad. “I was far, far removed from the workings of Google and even the computer,” Pasqualina says. But the ad was the biggest moment of their careers and he couldn’t pass up returning to it. He agreed on the spot.

Three other legends from advertising’s golden age were also on board: Amil Gargano, the man who launched Volvo in the US with the 1963 ad ‘Drive it like you hate it;’ Paula Green, who invented the ‘challenger brand’ concept with Avis’ ‘We Try Harder;’ and Harvey Gabor, who dreamed up Coca-Cola’s iconic 1971 television commercial ‘Hilltop,’ in which a global chorus sang, “I’d like to buy the world a Coke.”

They had signed up for Project Re: Brief. “Our purpose was to take a medium that is ignored more than it is loved, and inspire a new generation of creative people to use it to make exceptionally engaging work,” says Aman Govil, the Product Marketing Manager who led the experiment. “The message that we wanted to get across is that to create great online advertising, you first need to create great advertising.” The Google team could make these new ads shimmer with technical know-how, but the legends would ensure they had heart.

“If we can shift the way the industry approaches digital advertising, we can come up with work that people will love, remember and share 50 years from now… This is the third dimension of advertising; it’s immersive and emotive.”

END_OF_DOCUMENT_TOKEN_TO_BE_REPLACED

We embrace creativity all around us. Ideas can come from anyone, not just a ‘Creative’ department. We open-source ideas internally, and we also collaborate with many content creators, artists, developers, brands, agencies, and people who come to us with wonderful ideas. They stretch and inspire us. Collaboration is essential to problem-solving in our increasingly complex world. That is why we believe so strongly in the power of open technologies and platforms. They enable anyone, anywhere, to apply their unique skills, perspectives, and passions to the creation of new products and features on top of our platforms.

“It’s too easy to say ‘no’ all the time. It’s too easy to be cautious. Pushing the boundaries of creativity means saying ‘yes,’ taking risks, trying new things, learning, and being surprised. So we don’t just open-source ideas at Google, we open-source our brand.”

Good ideas sell products. Great ideas change lives. From opening up our brand to opening up museums, we see creativity as a way to solve problems – large and small. Lorraine

Curiosity and creativity are never far apart. You need to be curious to identify problems worth solving, and then come up with new solutions. We try to foster this in the Google culture. Our teams are full of curious, energetic, passionate people from diverse backgrounds, and they have unconventional approaches to work, play, and life. Our atmosphere may be casual, but as new ideas emerge – at lunch, on campus, in the gym – they are traded, tested, and put into practice with dizzying speed. Often these ideas become launch pads for new projects destined for worldwide use.

We don’t just solve problems with our software, but also with our marketing. Ultimately, we want to help people understand how technology can enhance their lives, letting them spend time doing more important things than reading a manual. To do that, we remind ourselves to constantly ask ‘why’ and keep a few rules of thumb in mind: Focus on one real person, be open, say yes, and have a purpose.

In a world where everything we do is counted in the billions (clicks, visits, users), it’s easy to think solely in terms of numbers and digits. That’s why we try to focus on one real person. That real person could be your mom, your brother, or your friend. Boiling technology down to a simple message focusing on real benefits that matter to people can make a product personal. It shows people how technology connects to and enhances their daily lives. It’s not always easy; people are more complex than machines, after all. We certainly don’t get it right every time, but our best creative work carries a simple yet meaningful message. Our ‘Dear Sophie’ ad for Chrome shows how one person – a new dad – can use the web to share memories with his daughter as she grows up. END_OF_DOCUMENT_TOKEN_TO_BE_REPLACED