The survey of 650 marketing professionals also found that 64% of businesses use social for brand awareness, 44% for marketing campaigns and a quarter (25%) for customer service.

The Quarterly Digital Intelligence Briefing: Managing and Measuring Social examines the trends for managing and measuring the business value of social media and provides a snapshot of social media uses, challenges and needs from companies today. Visit the link to view the infographic, as well as further interesting findings from the research data… 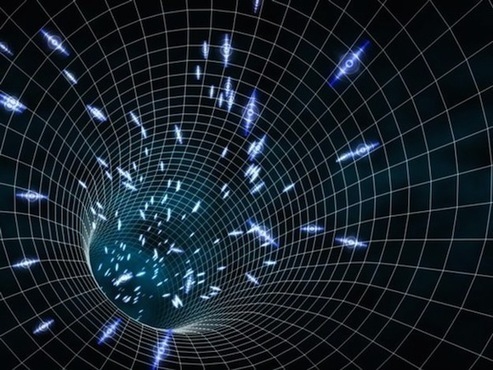 Imagine a clock that will keep perfect time forever, even after the heat-death of the universe. This is the “wow” factor behind a device known as a “space-time crystal,” a four-dimensional crystal that has periodic structure in time as well as space. However, there are also practical and important scientific reasons for constructing a space-time crystal. With such a 4D crystal, scientists would have a new and more effective means by which to study how complex physical properties and behaviors emerge from the collective interactions of large numbers of individual particles, the so-called many-body problem of physics. A space-time crystal could also be used to study phenomena in the quantum world, such as entanglement, in which an action on one particle impacts another particle even if the two particles are separated by vast distances.

A space-time crystal, however, has only existed as a concept in the minds of theoretical scientists with no serious idea as to how to actually build one – until now. An international team of scientists led by researchers with the U.S. Department of Energy (DOE)’s Lawrence Berkeley National Laboratory (Berkeley Lab) has proposed the experimental design of a space-time crystal based on an electric-field ion trap and the Coulomb repulsion of particles that carry the same electrical charge. “The electric field of the ion trap holds charged particles in place and Coulomb repulsion causes them to spontaneously form a spatial ring crystal,” says Xiang Zhang, a faculty scientist with Berkeley Lab’s Materials Sciences Division who led this research. “Under the application of a weak static magnetic field, this ring-shaped ion crystal will begin a rotation that will never stop. The persistent rotation of trapped ions produces temporal order, leading to the formation of a space-time crystal at the lowest quantum energy state.”

Because the space-time crystal is already at its lowest quantum energy state, its temporal order – or timekeeping – will theoretically persist even after the rest of our universe reaches entropy, thermodynamic equilibrium or “heat-death.” The concept of a crystal that has discrete order in time was proposed earlier this year by Frank Wilczek, the Nobel-prize winning physicist at the Massachusetts Institute of Technology. While Wilczek mathematically proved that a time crystal can exist, how to physically realize such a time crystal was unclear. Zhang and his group, who have been working on issues with temporal order in a different system since September 2011, have come up with an experimental design to build a crystal that is discrete both in space and time – a space-time crystal. Just as a 3D crystal is configured at the lowest quantum energy state when continuous spatial symmetry is broken into discrete symmetry, so too is symmetry breaking expected to configure the temporal component of the space-time crystal. Under the scheme devised by Zhang and Li and their colleagues, a spatial ring of trapped ions in persistent rotation will periodically reproduce itself in time, forming a temporal analog of an ordinary spatial crystal. With a periodic structure in both space and time, the result is a space-time crystal. 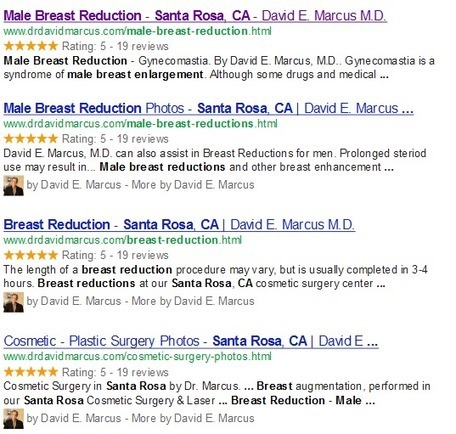 Mid September Google announced a new algorithm meant to allow more domains to appear in search results so one domain would not just dominate the SERPs.

Google has also been cracking down on rich snippet spam too and many of us have seen organic STARS removed from listings where we use legit and appropriate hReview markup. PLUS some folks have trouble consistently getting their author image to show up in the SERPS.

So given everything above, I was pretty surprised to see this search results page.

What do you think? Aggressive but smart marking  or spam?

Familiarize yourself with the different advertising options available on Facebook through this simple guide infographic.

This simple guide will give you the knowledge you need to master Facebook as an advertising and promotional option. Always remember that a long term investment which builds up your brand awareness in people’s minds is much better than counting products sold compared to your investment. Of course that matters too, but as far as brand awareness goes, there is little that will match a good long term campaign. It will all come back to you if you can hold out and keep investing without forcing your products on people. Advertising always works, but maybe not always in the way you envisioned it to.

The Foundations Of Coding HTML Email

Creating HTML emails that will look awesome on the dozens of email programs out there is tricky. If you’re new to the email world (or have picked up HTML in the last several years), learning how to get an email to look good can be a little trying. Worse, there are no email-specific standards in place.

#Use tables for layout, and basic inline CSS for formatting

#Know your audience: testing to see which email clients your subscribers use to read messages can help you know where to focus your efforts

Did you realize that there’s a secret side to exactly what the military spends its money on? Most people in our nation are not fully aware of what the money is being spent on. 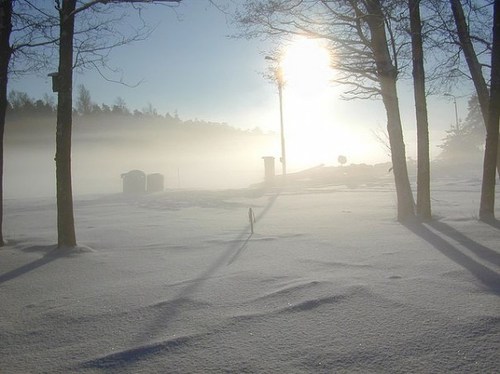 LinkedIn announced a new feature on Monday called Endorsements that gives users a simpler way to recommend their professional connections.

Until now, the primary way to suggest a friend or coworker for a job on LinkedIn has been to go through the process of writing a formal recommendation. Now, with the Endorsement tool, you can simply click the “Endorse” button to recognize one of your connections for a particular skill or skills.

Starting today, when you look at a contact’s profile page on the social network, you’ll see a list of skills at the top of the page and be prompted to pick which ones if any you’d like to endorse. Similarly, if you scroll down to the Skills and Expertise section of their profile, you’ll have another option to endorse certain skills just by clicking a plus-sign next to each of the skills listed.

LinkedIn will notify the user by e-mail when he or she has been endorsed by someone and these endorsements will be displayed on their profile page. Users still have the option to write longer recommendations as well, but Endorsements may be more popular for more casual recommendations.

In essence, the Endorse button is really just LinkedIn’s version of Facebook’s “Like” button, but geared towards professionals. This is just the latest example of LinkedIn trying to boost engagement on the social network by taking a page from competitors like Facebook and Twitter.  Earlier this year, LinkedIn introduced a Follow button for brands, similar to Twitter, and just this month the company rolled out a Facebook-style notifications system to keep track of network updates.