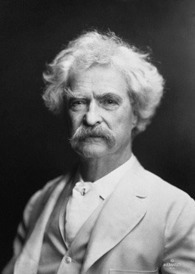 “The man who doesn’t read good books has no advantage over the man who can’t read them.”

“Name the greatest of all inventors. Accident.”

“Clothes make the man. Naked people have little or no influence on society.”

1. The secret of getting ahead…

This is a very good tip and one of the best ones I have ever discovered and used to handle procrastination.

When you start to look too far into the future any task or project can seem close to impossible. And so you shut down because you become overwhelmed or fearful (of success or failure) and start surfing the internet aimlessly instead.

So instead, break that task into small and practical steps.

And so you can take the next step. And the next one after that.

Until you have arrived at your destination and completion.
2. Less talking, more doing

“Action speaks louder than words but not nearly as often”

“There are basically two types of people. People who accomplish things, and people who claim to have accomplished things. The first group is less crowded.”

It’s often easy to talk but developing the habit of being a person of action is quite a bit harder.

Being in the habit of breaking down your task into smaller pieces is one of the most effective things you can do to take more consistent action. Two other habits that work very well for me are to:

Start your day with a good morning routine. This is probably the most important factor for how much action I take during a day and how the day turns out in general. A good start often leads to a good day. A bad or indecisive start often leads to a pretty mediocre day.
So create a morning routine with a good breakfast, perhaps a short work out or a short meditation and other things you find gets you off to a great start. Then add doing the most important task of your day at the end of that morning routine.
Or if you, like me, may feel low in energy, unmotivated or have extra inner resistance to taking action on some mornings then start small and do something easy and simple.
Take one small action right away to get the ball rolling. What is one thing you can do to pretty much make sure that something will get stuck on your I’ll-do-that-when-I-have-the-time list for a long time? Read about something and get excited about it. And then do nothing about it or tell yourself that you will take action tomorrow.
Instead, take one small action today, as soon after you have read about whatever you are excited about. Make a plan, book an appointment, do something concrete.

And although it is rarely easy to be courageous I have found a few ways to make it easier.

Ask yourself: what is the worst that could happen? Really think about. Don’t just think about it for a few seconds. Sit down with a pen and piece of paper, your laptop or cellphone. Write it all out and think about what the realistic worst-case scenario would be. Then write down a plan for how you can come back from such a scenario.
This step brings clarity, defuses fuzzy fears and helps you realize that you can most often bounce back pretty quickly even if the worst-case scenario somehow becomes reality.
Share your fear with someone. By sharing your fear you can relieve inner pressure. By just keeping it on the inside it’s easy to build it up into this massive nightmare and extremely dangerous thing.

By sharing and by getting some input from a levelheaded friend or family member he or she can help you to alleviate the fear and inner pressure. And you can gain a much healthier perspective on things again. Accept the fear. It is a natural impulse to try to deny the fear when shows up in your life. Perhaps you try to not think about it, you try to push it away. I have found that in many cases it is actually better to just accept that fear is here right now (although it can be hard to sometimes convince your brain that this is a good option).
By doing so you stop feeding more energy into the fear and you stop making it strong. After a few minutes of fully taking in this uncomfortable feeling and accepting it then it starts to lose steam. It just seems to float away – or at least becomes smaller – and you feel more open and centered.

Compliments are awesome. But make sure you make it a genuine one. Make sure you really mean it or it may have the opposite effect as your insincerity shines through. Find something a bit unexpected – like great taste in old soul music rather than looks – and something that is important to the other person and make a positive, appreciative comment about that.

5. Keep positive company “Keep away from people who try to belittle your ambitions. Small people always do that, but the really great make you feel that you, too, can become great.”

I have mentioned this many times. But it bears repeating.

Spend more time with positive people, books, music, movies and websites. Spend your time in an environment that lifts you up. And spend less time or no time with the negative sources out there. Make a conscious choice and start to shape your environment instead of just going along and reading, listening to, watching what people in general or people around you may be in the habit of consuming.

6. Focus on what is truly important for YOU

“Many a small thing has been made large by the right kind of advertising.”

Like with your environment it is important to make a conscious choice to focus on what is most important in YOUR life. And not on the things that various companies may tell you are the most important things.

Like I mentioned little more than a week ago, a note with the 4 most important things in your life smartly placed where you will see it every day – in your workspace etc. – helps you to keep your mind consistently on your top priorities.

And if you want a couple of practical tips that will help you to declutter your ad/information intake then: Ask yourself: is this useful? If for instance a TV-show or magazine isn’t bringing me anything useful – fun, fascination, useful tips etc. – then why am I spending my time on it? It’s kinda easy to just fall into a habit of doing stuff or consuming things without really having much of a reason for doing so.

Find out what you really like to do. That will probably be more interesting that surfing the internet or TV-channels randomly. And so these less exciting things just tend to fall away from your life as you find – or spend more time with – things that you really like to do, like for instance a new hobby. Shut off the sound during commercials. And talk to the person beside you on the couch. Or read a couple of pages. Or record the TV-show or movie. Then skip through the commercials.

7. When emotions are exploding… wait.

“Time cools, time clarifies; no mood can be maintained quite unaltered through the course of hours.”

It’s easy to make bad decisions when you are full of negative emotions. And it is very easy to become riled up, angry or defensive when you, for instance, receive some criticism or when someone is attacking you verbally. This is not a good position to be in to fire away a reply if you don’t want to wind up making the situation worse.

And to lash back at this person or to not be the better person here can really hurt your self-esteem. It might feel good for a while to do so but it is a dirty high that comes with a hangover of feeling worse about yourself and subtle or not so subtle self-destructiveness.

But how do you control the impulse to attack, overreact or make a hasty decision?