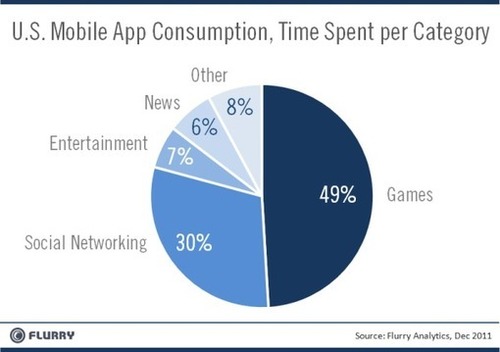 It’s not terribly surprising considering games have usually been the leading vertical on emerging consumer-facing platforms like Facebook. They also usually dominate the paid, free and grossing charts on the iOS and Android. But Flurry might be underestimating social networking usage just a tad, since its analytics product is not in Facebook’s applications — which are in and of themselves a major driver of mobile app usage.

The other point that Flurry explores is that consumers are substituting the amount of time they spend on the desktop and mobile web with time spent in applications. Flurry estimates that consumers are now spending more than an hour and a half a day using mobile applications, while web usage has shrunk to 72 minutes from 74 minutes. (But you must consider that Flurry is using Alexa and comScore to get its data for web usage.)

A big part of that is Facebook usage, Flurry argues. Citing Alexa and comScore, Flurry says users have cut their time on the web-based version of Facebook from 33 minutes per day in June to 24 minutes per day.

But the thing is Facebook’s smartphone apps are a complicated hybrid of HTML5 and native development. Facebook made a big transition over the past few years in building an HTML5-based version of the site called Faceweb that can support multiple platforms. Before last year, Facebook had to care for seven different versions of the social network for the desktop web, smartphones and feature phones. Each version of the news feed was generated differently. Now they are one and the same.

While Facebook’s apps are distributed like native applications in the stores, they are actually mostly web or HTML5-based except for features like snapping and sharing photos directly from the live camera. So it might not be entirely fair to call them native and then use their growth as the basis for an argument that native development is gaining at the expense of web usage.