Here comes a list of reads, videos and discussions on LinkedIn that I have enjoyed in the last couple of weeks. I hope you will enjoy this as well.

Thousands upon thousands of people will be in Austin, Texas next month for the South By Southwest Interactive festival – and several different services will be competing to show you where you can find your friends at the big event. Only one app, though, is focused on displaying your location down to the level of where you are sitting!

SitBy.Us is a web and mobile web application that lets you peruse the SXSW panel, keynote and party schedules, check in to rooms and locations, identify where in the big crowded rooms and parties you are sitting. Then it lets you see which of your friends from Twitter are there too and where. The service is a little unstable right now, but it looks like the kind of thing that’s going to get slammed in Austin.

END_OF_DOCUMENT_TOKEN_TO_BE_REPLACED

Email startup ReMail announced this afternoon that it’s been acquired by Google and there’s a pretty interesting story behind this cool technology that could inspire future developments in Gmail.

The news was announced by ReMail CEO Gabor Cselle on his blog today (we learned about it first via CenterNetworks). Gabor was a former Gmail intern and was YCombinator funded. There are even more interesting elements to this story than that, though.

ReMail the app has already been discontinued from the iTunes App Store, but here are some ways it could impact Gmail in the future anyway. Cselle will now become a product manager on Gmail. The core feature of ReMail was full-text search of all the emails in your Gmail or other online inbox, even when you were offline. That wasn’t the only cool thing about ReMail, though. END_OF_DOCUMENT_TOKEN_TO_BE_REPLACED Have you ever come across people that you’ve tried calling and emailing for hours but failed to receive any response from them? However, when you text them, they almost immediately reply.

According to Nielsen Mobile, in the first quarter of 2009, the average U.S teenager made and received an average of 191 phone calls and sent and received 2,899 text messages every month. By the third quarter, the number of texts jumped to a whopping 3,146 messages per month. This is equivalent to more than 10 text messages per hour.

At the beginning of 2007, these numbers were only 255 phone calls and 435 text messages. Preteens on the other hand, receive about 1,146 texts every month. END_OF_DOCUMENT_TOKEN_TO_BE_REPLACED

This morning, I stumbled upon this rather interesting post by Inc. on the steps to make money on Twitter. It’s refreshing to see clearly thought through strategies being posted rather than just telling someone to do this and that. END_OF_DOCUMENT_TOKEN_TO_BE_REPLACED

Trend Hunter .com – TREND HUNTER – The Latest Trends
Secret Shoe Showrooms – Flip Sellin and Team Create a Private VIP Room for Nike (GALLERY)
(TrendHunter.com) Maybe it’s because his name is so cool that he knows cool design, but Berlin-based designer Flip Sellin and his team have created a great private Nike showroom any shoe-lover would die to get in to. The…

(TrendHunter.com) Maybe it’s because his name is so cool that he knows cool design, but Berlin-based designer Flip Sellin and his team have created a great private Nike showroom any shoe-lover would die to get in to. The…

Re-Imagined Boat Houses – The GH3 Williams Studio Reinvents Cottage Life (GALLERY)
(TrendHunter.com) I find this piece of architectural work particularly interesting as I found out it is located not ten miles from where I grew up. It doesn’t happen everyday that you stumble on a great design that just…
Trend Hunter .com – TREND HUNTER – The Latest Trends
Angular Lock Lookbooks – Charlie Westerberg Wears Some Wild Hair for Cheap Monday (GALLERY)

(TrendHunter.com) For their apocolyptic-feeling lookbook, design label Cheap Monday decided to recruit model Charlie Westerberg and a smart choice it was. Not only can the man wear a look with the best of them, he can somehow…

(TrendHunter.com) The latest issue of Soko Zine Winter 2010 is claiming ‘No one can save us but ourselves’ in their fourth issue. Apparently saving yourself includes sporting an olive green bodysuit while venturing down…

The next table of analyst tweeters will be published very soon. If you were not included in the previous list and believe you should be mentioned please let me know.

Note – all calculations will be done via TweetLevel on Friday 18th February. Even though this tool is dynamic, I will only be able to report a static list on this blog. 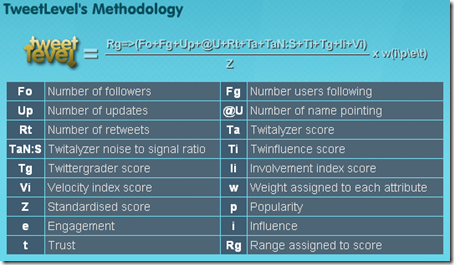 Following – Twitter lists the number of people each user follows. The tendency for most celebrities is to only follow a few individuals. The more people that someone follows, there is an increased likelihood of them actively participating in conversations with the community instead of simply broadcasting to it. Following ranges were determined (i.e. more than 20, more than 30, etc.) and each range was assigned a number (0 to 30) that was used as part of the algorithm. Note: Twitter opened its API to TweetLevel so that data could be sourced easily and quickly to benefit the user. END_OF_DOCUMENT_TOKEN_TO_BE_REPLACED

The pressure to keep secrets while working for Apple‘s supply chain partners in China is so intense that one worker killed himself last year, reportedly over a missing iPhone prototype.

So it’s not surprising — but still appalling — that a Reuters reporter was recently assaulted by security guards on a road outside a factory in China, just for taking photos.

Reuters buried the account halfway through an excellent, lengthy feature on the subject of secrecy within Apple’s Asian supply chain:

Tipped by a worker outside the Longhua complex that a nearby Foxconn plant was manufacturing parts for Apple too, our correspondent hopped in a taxi for a visit to the facility in Guanlan, which makes products for a range of companies.

As he stood on the public road taking photos of the front gate and security checkpoint, a guard shouted. The reporter continued snapping photos before jumping into a waiting taxi. The guard blocked the vehicle and ordered the driver to stop, threatening to strip him of his taxi license.

The correspondent got out and insisted he was within his rights as he was on the main road. The guard grabbed his arm. A second guard ran over, and with a crowd of Foxconn workers watching, they tried dragging him into the factory.

The reporter asked to be let go. When that didn’t happen, he jerked himself free and started walking off. The older guard kicked him in the leg, while the second threatened to hit him again if he moved. A few minutes later, a Foxconn security car came along but the reporter refused to board it. He called the police instead. END_OF_DOCUMENT_TOKEN_TO_BE_REPLACED

Here are things that you can now avoid:

The reasons? Well, they don’t work. They don’t work because big events leave little room for iteration, for trial and error, for earning rapport. And the biggest reason: frequent cheap communication is easier than ever, and if you use it, you’ll discover that the process creates far more gains than events ever can.

﻿The top six social media tips to know before you leave the office.

As social media use continues to grow – particularly throughout the business world – it can be difficult for companies to identify where best to focus their limited resources. After all, there are hundreds of social networking sites around today, and few companies have the bandwidth to properly engage on all of them.

With over 80% of Americans involved on at least one social networking site, the importance of corporate social media engagement cannot be understated. When correctly utilized, social media provides unparalleled opportunities for reaching new audiences, strengthening relationships with current customers and supporters, and building goodwill should you ever need to draw on it during a crisis.

Before diving into social media, every company needs to carefully outline its goals and consider which platforms are best for achieving their desired results. This week’s Six @ Six outlines six of the most important questions each company needs to ask when considering a social media presence. If you have additional suggestions, let me know on Twitter @DallasLawrence. END_OF_DOCUMENT_TOKEN_TO_BE_REPLACED

Launched in September 2009, Leebug has focused recent development on integrating its platform with existing social media. Event communities are set up for free on the platform and event producers can take advantage of registration integration, a suite of customization tools and revenue sharing through sales of virtual booths. Leebug has added the ability for users to import their profile from LinkedIn, saving them the time of manually entering yet another online profile. Last week Leebug’s new social media dashboard called The Hub was released. Feeds from Twitter, Flickr and YouTube stream into The Hub and give event participants a real-time visualization of the event. END_OF_DOCUMENT_TOKEN_TO_BE_REPLACED

If you are an active or passive job seeker, there is no better way to cut through the clutter and get yourself noticed than LinkedIn. Nowadays, most recruiters and companies are increasingly using sites like LinkedIn to identify talent. Given my experience looking for candidates, here are some key characteristics of a LinkedIn user that grab my attention when I make my daily picks:
1. Make your LinkedIn profile 100% complete
• Include all companies, education, and awards. These are the key items on which we recruiters search.• References are very important. The more we know about you the better.• The more robust your profile, the higher you will be in the Google search rankings.• The more information a recruiter has upfront, the more efficient the search process.• Update your LinkedIn profile here
2. Use a profile picture that you use on multiple sites
• A picture helps to create and reinforce your online brand• It will help a recruiter identify you on the interview day at “Starbucks”• Add a profile picture here END_OF_DOCUMENT_TOKEN_TO_BE_REPLACED
-34.493471 -58.647251